Car will be ultimate reward!

Building off the momentum created by its football program, Union High School officials are on the edge of implementing a positive behavior intervention program they hope will not only encourage character and positive behavior in their entire student body, but will also offer huge rewards—among them, an automobile—as a year-end drawing!

The program, entitled “enCOURAGE CAREcter,” involves teachers and administrators seeking out students who are treating others with respect and kindness, and then handing them an “enCOURAGE CAREcter” card with a positive explanation of the behavior demonstrated. The student fills out the card and then submits it to a collection box where administrators draw cards numerous times throughout the school year for prizes ranging from daily lunches donated by Gandolfo’s, to ITunes cards, to headphones, to the ultimate prize of winning a new car. Local automobile dealer, L & L Motor, has committed to donate the car.

“We are very excited to put into action this positive behavior intervention program,” said Union Principal, Rick Nielsen. “We are proud of what our football coaches and team were able to learn about character but realize we still have significant challenges relating to behavior. We look forward to continuing our efforts to recognize and reward specific positive behavior.”

Nielsen said that with the community’s help, he hopes that all students will increase not only their positive behavior, but also their attendance and academic performance. “I am so impressed with Matt Gardner and Mike Labrum at L & L,” praised Nielsen. “They have really stepped up and have a genuine interest in participating in this program that will help kids succeed.” Nielsen added that he and his committee had just begun their efforts to organize rewards and prizes and looked forward to involving as many businesses as possible.

“All of your students hope that some day they’ll be winners,” Kelly told the educators. “Wasatch has given away a car at the end of the school year the last two years and it’s proven to be very effective in changing the behavior in our students. The car is the catalyst. When students know there’s a car that one of them will drive home, they’ll try to do their best to do what they’re asked.“

Kelly, with the help of his teachers and staff, conducts daily, weekly, and quarterly drawings that enable him to personally communicate to his students the positive things they are doing while encouraging continued acts of integrity and constructive behavior. “We rely a lot on our community to help us in funding this effort,” he explained. “Danny Labrum donates the car and several other businesses and individuals donate finances to help us purchase prizes that kids will work hard for to display positive behavior.”

Union art teacher, Elizabeth Sampson, will conduct a contest where students will submit designs of a logo for the “enCOURAGE CAREcter” program. Once a winner has been determined, cards will be purchased and the program will be in full swing. A Monday morning assembly, featuring motivational speaker, Josh Drean, promoting character building and anti-bullying, helped introduce the school’s program to the student body. 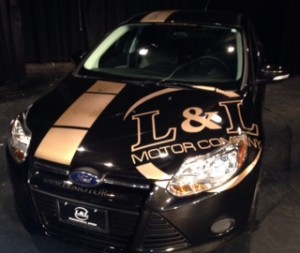 A committee made up of teachers, coaches, and parents has identified specific indicators and needs that will drive the implementation of Union’s “enCOURAGE CAREcter” behavior intervention program.

“We were so impressed with the progress of our football team but wanted all of our students to benefit from character training,” explained Thacker. “We conducted student, teacher and parent surveys and were able to identify specific issues that were contributing to our behavioral difficulties here at Union.”

Union teacher, Jesse Fieldsted, is heading up the research portion of Union’s advancement of “enCOURAGE CAREcter.” Research shows the traditional procedures of dealing with behavioral problems might do not get the results hoped for with today’s kids.

Fieldsted summarized a portion of his findings by stating that school officials “have, for years, tried to correct negative behaviors with strong discipline.” But “corrective philosophies, like control and coercion, are not effective and do not reduce repeated offenses by kids.” He added that the research suggested that when “punitive methods are the main response from adults to undesired behavior, kids will try to figure out how not to get caught, rather than learning why they shouldn’t engage in the behavior in the first place.”

“When kids are struggling with behavior, they are limiting themselves and sometimes, others, from reaching their learning potential. They are missing classes and instruction which reflects in their academic performance,” said Union principal, Rick Nielsen. “Sometimes, all our students need is a little positive in their lives. If they know and believe administrators and teachers are pulling for them and are willing to reward them for the positive things they do, they’ll keep doing it. We hope this will influence their attitude regarding their personal academic focus.”

“It’s pretty simple,” said Mike Ross, Union athletic director and assistant principal. “When a teacher, staff member, or an administrator sees a student exhibiting character, they circle the “R,” or the “S,” or the “V,” or the “P” on the back of the card. They also sign their name so it’s evident from whom the card originated.”

The teacher hands the card to the student with a positive face to face explanation of the character demonstrated. The student writes his/her own name on the card then he or she drops it into the tumbler box in the main office.

To obtain data, administrators had asked the card giver to sign the card and then circle one of the letters of the acronym to indicate the element of character the student is demonstrating.

“We want to see what elements of character we are doing well with and what elements we need to work on,” said Mr. Forsyth, assistant principal. “We also want the card giver to take the time and communicate with the student the element of character being recognized.”