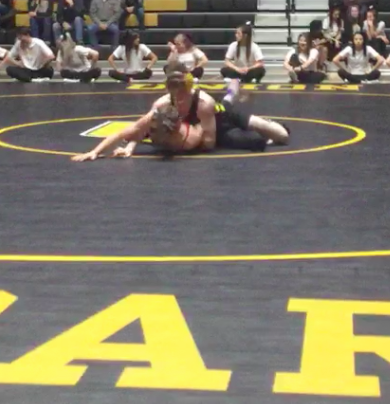 The UC wrestling team was in action on Wednesday night against region opponent Manti. The JV matches set the tone early for the night. The JV team won early and often pinning the majority of their opponents in the first round. When the dust had settled after the JV Matches the Cougars had won 30-6. Then it was the Varsity’s turn to take the mat starting off with a tough battle at 106 pounds where Freshman Dallin Foote fought to a very close decision that went the way of the templars. Next up was Sophomore Westin Hagman who took his opponent down repeatedly scoring the Technical Fall early into the second round. Jory Jenkins and Dallon Farrer added to the Cougars totals by pinning their opponents early on in the first period. Next up Hayden Riner stumbled falling to one of the stars in the Templars line-up Kayden Fowles. Wyatt Richards controlled the tempo in his match scoring a 12-2 major decision. Kevin Urzua then added another pin for the Cougars. Trevyn Braithwaite then fought hard but eventually fell to make the score 15-27. Senior Chipper Harding then accepted a forfeit for the Cougars before Cadance Ross Pinned his man advancing the score to 15-39. The last two matches went to the Templars in a pin at 182 lbs and a forfeit at 220 lbs. but it was too little too late as the Cougars finished with a 27-39 Victory. The Cougars will host a tough team from Emery next Tuesday the 21st for Senior night! Go Cougars!!!